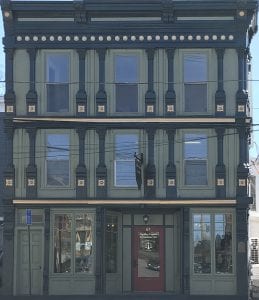 In 1933, the Founding Partner of the Firm, Thomas J. Capalbo, Esq. was awarded the degree of Juris Doctor from Boston University Law School. Thomas went on to practice law locally in Rhode Island and Connecticut for some 50 years. In 1951, Thomas was elected a member of the Rhode Island Constitutional Convention and served as Assistant United States Attorney for the District of Rhode Island (1951-1953). Thomas was also elected to the Board of Directors of the Groton Savings Bank (now Chelsea-Groton Savings Bank) where he also served as the Bank’s legal counsel.  Additionally, Thomas served as a member of the Westerly Town Council, Westerly Town Solicitor (1970-1972), and Westerly Probate Court Judge (1973).

The Firm’s original location was in Pawcatuck, Connecticut where Thomas first opened his practice in 1934 as a solo practitioner.

In 1939, Thomas relocated the Firm across the river to Westerly, Rhode Island.

In 1979, the Firm again relocated, this time to The Capalbo Building, where it currently stands today on 67 High Street, Westerly, Rhode Island 02891.

In 2010, Nicholas E. Capalbo, Esq., another grandson of the Founding Partner, joined the Firm. In 2015, Nicholas was named Partner. Nicholas is licensed to practice law in Rhode Island. Nicholas previously served as law clerk for the Westerly Town Solicitor (2010). In his capacity as law clerk, Nicholas assisted the Town Solicitor as legal advisor to the Town Council, Town Manager, and all other officers, departments and agencies of the Town, as well as appearing for and protecting the rights of the Town in all actions, suits or proceedings, civil or criminal, in law or equity.

Now in its third generation of practictioners, the Firm stands as strong as ever. With over 80 years of dedicated service to the community, the attorneys at Capalbo, Capalbo & Hartford, LLC work diligently to provide the highest caliber legal counsel to its clients throughout Washington County, Rhode Island and New London County, Connecticut.

Capalbo, Capalbo & Hartford, LLC is a law firm that can be relied upon, one that delivers, and one that stands above the rest. Please call today at (401) 596-2780 to schedule your free half hour consultation.

Disclaimer: In accordance with applicable rules, the material on this site may be considered advertising. The Rhode Island Supreme Court licenses all lawyers in the general practice of law. The Court does not license or certify any lawyer as an expert or specialist in any field of practice. This web site material has been prepared by Capalbo, Capalbo & Hartford, LLC solely for informational purposes, does not create an attorney-client relationship, and should not be construed as legal advice on any specific facts or circumstances.

Or complete the form below to send us a message.